Well, let's just start with a little explanation.  Our third born child is a girl.  We never thought we'd have such a thing and we think she's so pretty and feminine and sweet.  Which makes her nickname, Gorilla, seem a bit curious.  The fact is, my husband never met an ordinary word he wanted to leave alone, and songs had better just run for cover.  Fond as we are of trains around our house, the "Thomas and Friends" theme song is a favorite.  Except my kids know it better as "Thomas and Fiends".  You get the picture.  So when the little female showed up we adapted our second-favorite lullaby, "Sweet Baby Boy" by Randall Goodgame (we adore all of his stuff and you should absolutely check him out here), to work for our sweet baby girl.  Sweet baby girl quickly got changed to sweet baby gorilla.  DD (firstborn who requires everything to be decently and in order) raged, Teep (second born, always up for a good time) thought it was hilarious, and I mourned the large, hairy implications for our not-small, definitely already-due-for-a-haircut daughter. But as nicknames tend to do, Gorilla stuck, and now the word is synonymous with our sweet, smiley baby.

SO.  My dear friend and fellow bibliophile, Jaclyn, has a knack for sniffing out perfect,
unowned-by-me books for my kids, and she showed up at church yesterday bearing Good Night, Gorilla by Peggy Rathmann for our own gorilla.  (Her genius selections for the boys will come up in future reviews, you may be sure.)  I usually wait to review books until I've lived with them for awhile, but we're all already in love. 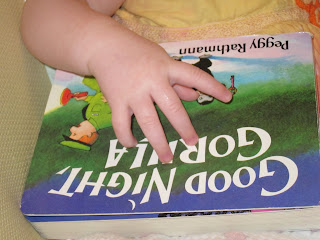 The text is sparse, but the illustrations can really carry it.  And I say that as a person who loves words considerably more than I love pictures.  Rathmann does a brilliant job of depicting a zookeeper's weary frame, hunched over and tip-toeing around the zoo, checking in on each animal and telling him or her goodnight.  He remains unenlightened about the fact that the gorilla stole his keys and is freeing each animal that the zookeeper visits.  A trail of animals follow our worn-out zookeeper into his house and make themselves comfortable in his bedroom.  When, none the wiser, the zookeeper's wife bids him goodnight, she gets 7 responses from the various creatures.  Perhaps my favorite spread depicts a dark room with just her startled, wide-open eyes.  I won't reveal everything, but will say that the last page highlights the gorilla snuggled between husband and wife in bed, and there's something endearingly familiar about that situation. 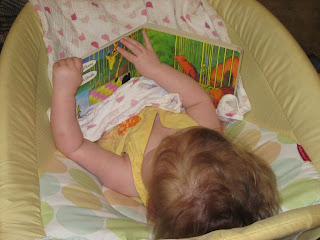 I really love a picture book that has text that is memorable or brief enough (or both!) that a child can feel that he is "reading" a favorite book independently.  This book showed up in our lives yesterday and my two boys have already got it down.  The fun, detailed illustrations make for some great talking points, as well.  (How did that mouse on pages 1 and 2 manage to retrieve the high-hanging banana he's holding on pages 3 and 4?  Does anyone recognize the stuffed toy in the elephant's cage? etc.)
An older (5 and up?) child might be bored by this one, but if you have little guys, it's definitely worth a read!
﻿
﻿
﻿

King Bidgood's in the Bathtub

When I landed my dream job - bookseller for Barnes & Noble - in July 2000, I couldn't imagine life improving much.  And then I set my sights on my dream position within that dream job: Children's Department Supervisor.  My then-boss seemed surprised at the passion with which I made my case: "Yes, I know it's considered a difficult job.  Yes, I just started with the company three months ago.  Yes, I really, really, really want this." Don't almost all good things happen in October?  I got the job.  My immediate supervisor told me to spend a lot of time reading the books.  I would, he said, have a lot of customers who came in looking for "that one book about a mouse in a green dress who has a picnic and my daughter just has.to.have.it or there will be no peace ever again in our house."  Um, okay.  I could handle that assignment.  I set right to work devouring picture books, and King Bidgood's in the Bathtub by Don and Audrey Wood was one of my very first favorites. 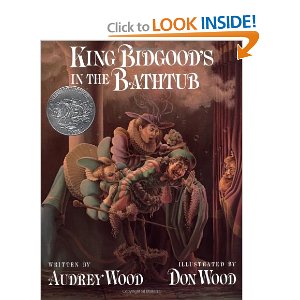 Published in October (of course!) of 1985, it was a Caldecott Honor book, and with good reason.  The illustrations are lush, detailed and only my devotion to books stops me from dismantling this one and framing each page.  The premise is this: King Bidgood is in the bathtub and intends to stay there.  The distraught young Page calls on the adults in his vicinity for direction: "Help! Help!...King Bidgood's in the bathtub and he won't get out! Oh, who knows what to do?"  The Knight, the Queen, the Duke, and the Court all offer suggestions.  ("Get out!  It's time to battle!", etc), but King Bidgood only suggests that battling, lunching, fishing and the Masquerade Ball can all be handled in the bathtub! 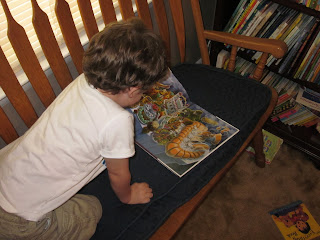 If there's anything a young child likes, it's a ludicrous suggestion like eating lunch in the bathtub. My DD and I read this one recently for the first time in a while and he was fascinated.  He wanted to know how the fish got in the bathtub, what they were eating, and what was the meaning of the masquerade ball. 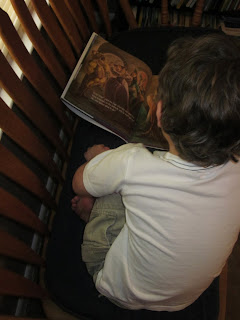 Don and Audrey Wood are masters of storytelling and illustration, and this book is as beautiful as it is fun.  But in my opinion, the best part about it is while a growing number of adults are stumped by this royal bathtub predicament, it's the little Page who comes up with the solution.

Check it out!  I bet your little Page will be stomping around the house like mine has been all afternoon, chanting "King Bidgood's in the bathtub and he won't get out!"

The inscription in the front of my copy of Alison McGhee's Little Boy indicates that I bought it in 2008, well before I had a little boy of my own.  But while my desire for a son was considerable, the book's many merits are its own. 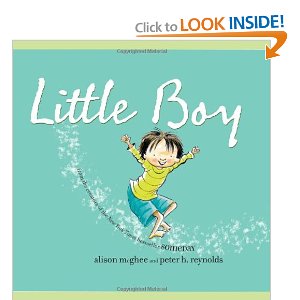 It was intended as a father-son companion to McGhee's lovely mother-daughter picture book, Someday.  While there is a father figure in the periphery of this story, I don't automatically categorize it as a parent child book.

I love the simple, rhyming text, which playfully outlines a typical little boy's day, focusing especially on his exploits with his "big cardboard box".  And the big cardboard box is the reason I chose to review Little Boy as my inaugural blog entry.  My boys asked me to read it recently.  That afternoon, after I emptied a package I'd received in the mail, they asked for the box.  It's not especially big, but their imaginations are. 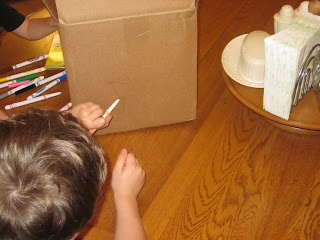 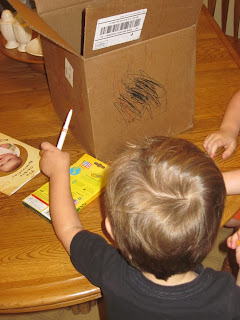 ﻿
After they had it decorated, the real fun began: 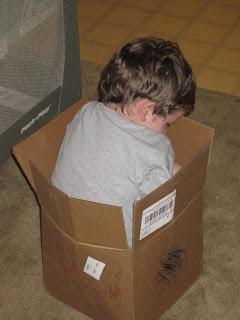 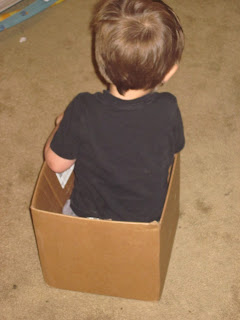 The boys spent the better part of an hour playing with, in and around this box.  In my house, there's no truer test of a popular plaything than the "timer test." In other words, if I have to set my oven's timer for five minutes per child with the toy/box in question, they are having a good time.

Little Boy is a heartwarming little book and the illustrations by Peter Reynolds are perfect, but ultimately my favorite thing about it is the way it opened the eyes of my sons to think of a box as a delightful way to spend an afternoon.

My favorite quote: "Little boy, so much depends on...your starship pajamas, that story about llamas, the way you don't worry, the way you won't hurry, and...your big cardboard box."
This is a perfect baby shower gift or birthday present for a little guy.  And check out Someday for a girl, too!