Thanks to my dear friends who hosted a Build-A-Library shower (how perfect is that?!) for me before my daughter was born, Gorilla has a bookshelf in her bedroom filled with books that feature princesses and ballerinas and fairies and more pink, purple and teal than I've maybe ever seen in one place.  So perhaps it's ironic that the first "girl" book I'm reviewing is about...pirates.  Yes, pirates.  We celebrate femininity around here, but we also appreciate books that break the mold in some way.  According to my note in the front of my copy of The Night Pirates* by Peter Harris, I purchased it in June of 2006. 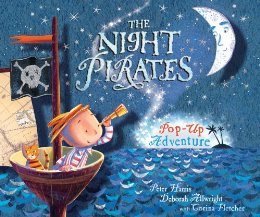 My husband wouldn't make his way on the scene until later that summer and I didn't have children of my own, but I distinctly remember carrying this book around the Barnes & Noble at which I worked, trying to convince everyone with kids, (especially girls), to buy it.  Children's books are my passion and I can happily discuss them for hours, but there are only a few that I felt so strongly about as this one.

The story opens on a dark, mysterious night.  "Down down down the dark dark street they came.  Quiet as mice, stealthy as shadows." Stealthy?  I love it!  Why not have a vocabulary lesson while we're at it?  Each carefully chosen word paints the picture.  We meet Tom, a nice, brave little boy who's in his bed, about to have an adventure.  And then we meet the pirates, matey!  Pirates?  Oh, yes.  Rough, tough little girl pirates.  The little girl pirates need the front of Tom's house for a disguise, but do they turn him down when he asks to join them?  ("And did the girl captain say, 'Certainly not!  You're only a boy!' Oh no, not at all!  Instead she roared 'Welcome aboard!"')  I appreciate a great story as much and probably more than the next guy, but at the end of the day I'm a mom first, and I've got to admit to loving the inclusive attitude of our little girl pirates.  Speaking of inclusive, my big boy loves nothing more than his baby sister, and this is how they cuddled up to enjoy the story: 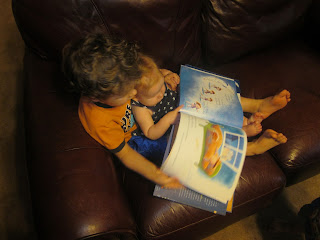 
One of my favorite things about picture books is the way anything is possible.  For me, it's refreshing to take a mental break from the cooking and laundry and dishes and bills and go to a place in which little girl pirates casually swipe the front of the house for an evening, attach it to their ship, and sneak up on grown-ups, undetected.  I don't think you or your (male or female) kiddos will be disappointed by this one.

*This link is to the pop-up version, which I've actually never seen.  My copy is a traditional hardcover, which appears to no longer be in print.
Posted by Sally at 12:51 PM 3 comments:

As a third-born child, I always tease my parents that I got the short end of the stick as far as the usual suspects: baby pictures, hair brushing, attention, and - most importantly to me - books.  But there are a few books that were mine, only mine, and one of them was Margaret Wise Brown's The Runaway Bunny.  Because that book was actually given to me, I remember requesting it often.  I confess that the charms of the beloved classic, Goodnight Moon, escaped me until I had my own children.  I have come to appreciate the great green room, the comfortable repetition, and the soothing words in the last 4 years or so.  We pull it off the high (because my books are alphabetical by author, ya'll) shelf every now and then and the boys like it well enough.  But the Margaret Wise Brown title that gets (by far!) the most attention around here is Goodnight Moon's companion book, My World.  It was originally published in 1949 and illustrated by Clement Hurd.  It went out of print for decades and is now back in print. 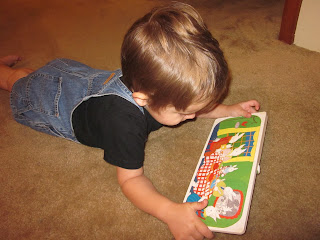 The text in this little board book is choppier than the melodic Goodnight Moon, but my children bring it to me again and again.  The book follows the little bunny through his day: waking up, eating, playing, interacting with his parents, washing up.  His cozy home in the country always makes me feel homesick for a simpler time.  My two year old son is especially interested in the few pages without text. 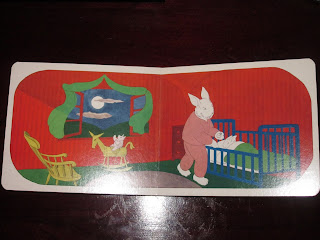 ﻿
Teep spends a lot of time talking about how the daddy is putting the baby to bed, the moon in the window, the rocking chair, etc. 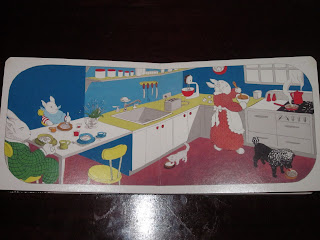 And this breakfast scene is probably his favorite.  He's inexplicably sure the mama is making beans (hey, I'm a vegetarian, but I draw the line at beans for breakfast!) there at the counter, and that the daddy has an egg, and so on.  We get to discuss the sounds that dogs and cats make, and generally have all sorts of imaginings about what is going on. 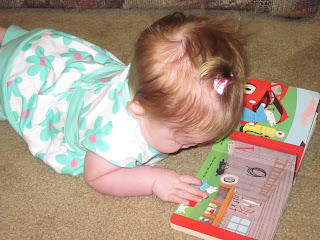 This photo shows Gorilla checking out another of the boys' favorite scenes.  Here the little bunny works on his toy car while the daddy repairs the real car.  My boys go around the house repeating "Bang, bang, bang!  My car.  My car won't go very far."
Margaret Wise Brown never had children of her own, but tried out a lot of her stories on the children who attended the experimental school at which she worked.  She tweaked her texts based on the responses of the children and the result seems to be books that children more or less universally love.  By the way, if you're interested in knowing more about Margaret, Leonard Marcus wrote a lovely biography, Awakened by the Moon, which I found fascinating and informative.
This is one of those books that I picked up when I was a childless bookseller because I thought MWB probably knew what she was doing even if the book didn't appeal to me personally all that much.  Well, she proved me right.   The edges of our copy of this sturdy book are worn from love and use.  We all think you should give it a try, too!
﻿
﻿
﻿