Even Firefighters Hug Their Moms

Well, just look at this cover: 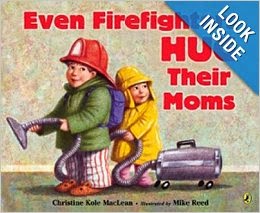 I really just couldn't help but pick it up and look through it when Even Firefighters Hug Their Moms showed up on my shelving cart at the children's department I supervised back in 2002.  Christine Kole Maclean's endearing picture book follows a young boy through his busy, busy day of sampling various career choices (firefighter, police officer, EMT, construction worker, helicopter pilot, train conductor, astronaut and garbage-truck driver).  I first read and fell in love with this book before I had kids, because the little boy (whose name changes with each occupation) brilliantly uses what's available to him in the  household to construct the things he needs.  His fire truck is the couch with a bowl as steering wheel, the police officer's prisoners get locked up in a crib "jail", the EMT's patient gets bandaged with toilet paper, etc.  Now, I have little boys who not-as-brilliantly-but-just-as-persistently attempt to build things. 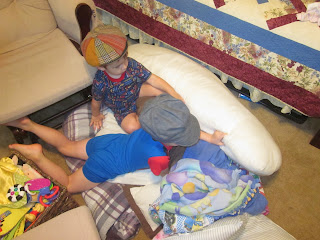 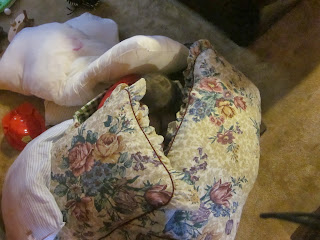 You guys, the boys pull these pillows and blankets out and around my house multiple times a day. It's honestly a source of frustration to me, so I love to read Even Firefighters Hug Their Moms to remind myself that they're not hurting anything and they are growing their imaginations and it's actually a really beautiful thing.  That's DD there in the second photo, inside the toy box, surrounded by pillows.  And his firefighter hat.
I love the way the little guy in the story incorporates his sister in every new imagining, and how she's right there with him.  The little sister in our house is too young to play along, but that doesn't really stop my boys from including her.  The other day DD and Teep were having this conversation at the breakfast table:  DD:  "When I grow up, I'm going to be a construction worker!" Teep:  "Me, too!" DD:  "And we'll have a special seat for Gorilla up on our digger machine."
As you might have guessed, a common theme throughout the story is that the kids' mother is (so much more sweetly than I) encouraging this play, and repeatedly reminding her little son that "Even firefighters" (police officers, helicopter pilots, etc) "hug their moms". 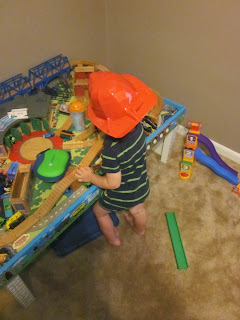 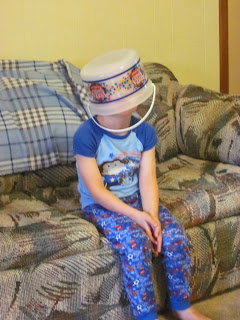 ﻿
(Firefighter playing trains, and unenthused "astronaut".)
This whole book is a good example of how my children translate things they see in books into their personal reality, but I still love it when books come up in everyday life.  Here's a quote from the book, during the portion when the little boy is playing a train conductor:
﻿
﻿"What do you get when you buy a ticket? a lady asks.
"You get a ride to Chicago," I say.
"Snacks?"
"No, but you can buy food in the dining car."
"Hugs?"
"No, no hugs.  Only a ride to Chicago."
"Even conductors hug their moms," she says.
Recently,  DD asked where his friend Sam lives.  When I told him that Sam lives in Chicago, he immediately grinned and said, "No, no hugs.  Only a ride to Chicago."
I really wanted to get my act together and post about this book on September 11th, because another really great thing about it is that the publisher donates a portion of the sales from the book to the Twin Towers Orphan Fun.  You know what else?  Christine Kole MacLean is such a friendly person!  You want to think that's a given for a children's book author, but...it's not.  She has several other books and you can check her out at her website above.
I'll stop sitting around at the computer now, because.... 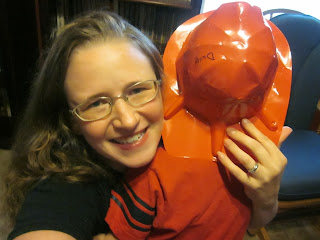