A dad who rocks and Trucks that Roll.

I apologize for the long, long break between posts.  Our house got hit hard with every kind of weather-changing infection you can imagine: strep, ear infections, RSV, and pneumonia.  Gorilla even ended up in the hospital for three days over Thanksgiving.  It was a scary time but I was actually relieved to get to a place where she could get fluids and oxygen.  She (and I!) spent a lot of time in an "oxygen tent". 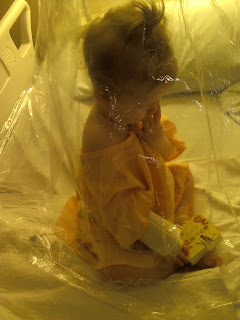 So many books, so little time.  Take one on into the oxygen tent, baby.
While I was in the hospital with Gorilla, my husband totally took over the affairs of the household, including the two boys, the disgusting poopy (cloth!) diapers and floorful of puke I left in my wake in my rush to get the baby to the doctor (who sent her on to the hospital).  Despite the fact that the situation meant that we couldn't be with his large family (who were all supposed to be together for the first time in 2.5 years) over Thanksgiving, he was Super Dad personified.  He took the boys to the library, gave baths, did laundry, cleaned, cooked, made cookies, built train tracks, gave breathing treatments, dispensed antibiotics without reminders, and still hauled the whole crew in to visit with the hospital-bound females twice a day (usually bearing coffee.)  I felt guilty about not being there to do my job and a little ashamed that he seemed to be doing it with considerably more grace than I usually do.
But the boys did miss me, and were very happy when "that nurse said Mama can go free", according to DD.  I had hardly scarcely gotten in the door with the last of the suitcases, discharge information, and get-well balloons before both boys called to me from the couch, laden with books.  Not to imply that my husband didn't read to them in my absence - he did.  But he didn't read the quantities that they're accustomed to, and so my sense of usefulness was renewed and we got to work. 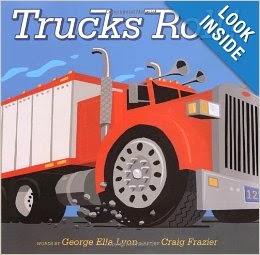 One of the first ones in the stack was Trucks Roll by George Ella Lyon.  This book was given to DD at birth by my dear friend Kristin.  She blogs about family, life, adoption, faith, books and a lot of other things here, and you should definitely check her out.  Her daughter was two when DD was born, and Kristin and her husband had found themselves reading Trucks Roll quite a bit to little Cate.  Four years later, we're still so glad to have it as part of our personal library.  I love the realistic trucks rendered by Craig Frazier.  The text includes some great words my boys hadn't heard before, like "pistons", "dispatcher", and "weigh stations".  The rhymes are successful (certainly not a given!) and while there are many glimpses of "real life" as a truck driver, there is some fantasy as well (one spread depicts a pile of oversized chocolate chip cookies on the flatbed).  I like this word picture:
Haul them through mountains,
over rivers, past towns -
around blue sky curves,
through rain pouring down.
There's a refrain ("trucks roll!"), and I'm fond of those in a picture book.  It means I can quote portions of the books and the boys can chime in at the end.  The predictability appeals to them and makes them feel smart.  We all know how I love a book that inspires imaginative play: 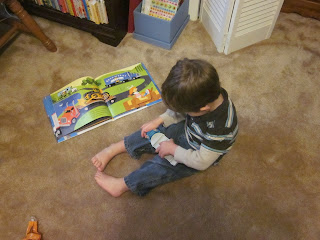 We have read this book several times since Saturday night, and today Teep found his toy truck to play with while looking through the book. 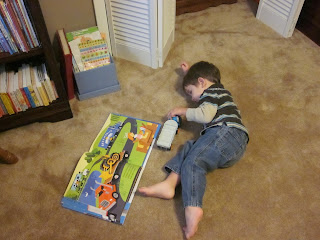 I found him in his bedroom like this, repeating over and over again, "trucks roll!" I don't know how to give a higher recommendation than that.﻿
﻿