I mentioned in my last post that I had spent some Christmas gift cards on seven new picture books.  They have arrived, and I love them to varying degrees.  The one I love the most was a recommendation from a bookseller friend of mine.  We worked together for some years at Barnes & Noble.  I moved away and she stayed at the store I'll always consider the home of my career.  The very smell of that store moves me.  Anyway, she now supervises the children's department, and she gave me a list of titles to research.  I've lost count of how many times we've read Sophie's Squash since it arrived last week. 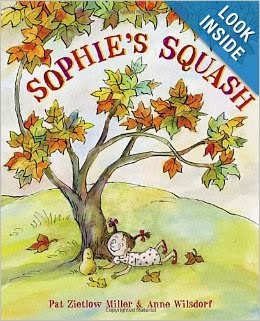 Written by Pat Zietlow Miller and published in time for Fall last year, Sophie's Squash is, according to the author biography, based on a true story of the author's daughter.  To be honest, I'm sure there's a common-interest element that comprises some part of my love for this one.  I spent my childhood not caring one tiny iota about any kind of plant life.   Then I got married.  My husband knows at least a little bit about almost everything, but one of the things he knows a decent amount about is gardening.  Probably not devoting much thought to it, he tossed a couple of basil seeds in a pot and a tomato plant or two in another, sometime before our second anniversary.  When those seeds and plants turned into something I could retrieve from our apartment's patio for dinner (or at least part of dinner), I was totally hooked on gardening.  We moved from that apartment to a house at which we've had a garden every year.  I cannot imagine ever getting over the wonder of spending mere cents on a packet of seeds, only to have it grow and blossom and become edible.  I love knowing how it's been cared for and the convenience of plucking a bit of this or that to be part of a meal that ends up on my table minutes later.  I can't help thinking we should return to food preparation that looks more like that and less like boxes from the supermarket.  So, the gardening-vegetable-farmers'-market element of this book made it somewhat of a shoo-in for my affections.

But while I believe parents probably have some influence over the books their children love, I didn't do a thing to force it upon DD.  It arrived with two others.  We read all three, then he asked to read all three again, starting with Sophie's Squash.  Then just Sophie's Squash.  At bedtime?  You guessed it.  When I announced my intention to shelve it on his sister's bookcase,(because his is full) he stared at me with the frown and furrowed brow of my people.  He's not the boss around here, but it's worth noting that Sophie's Squash has stayed on the reading bench in his room ever since. 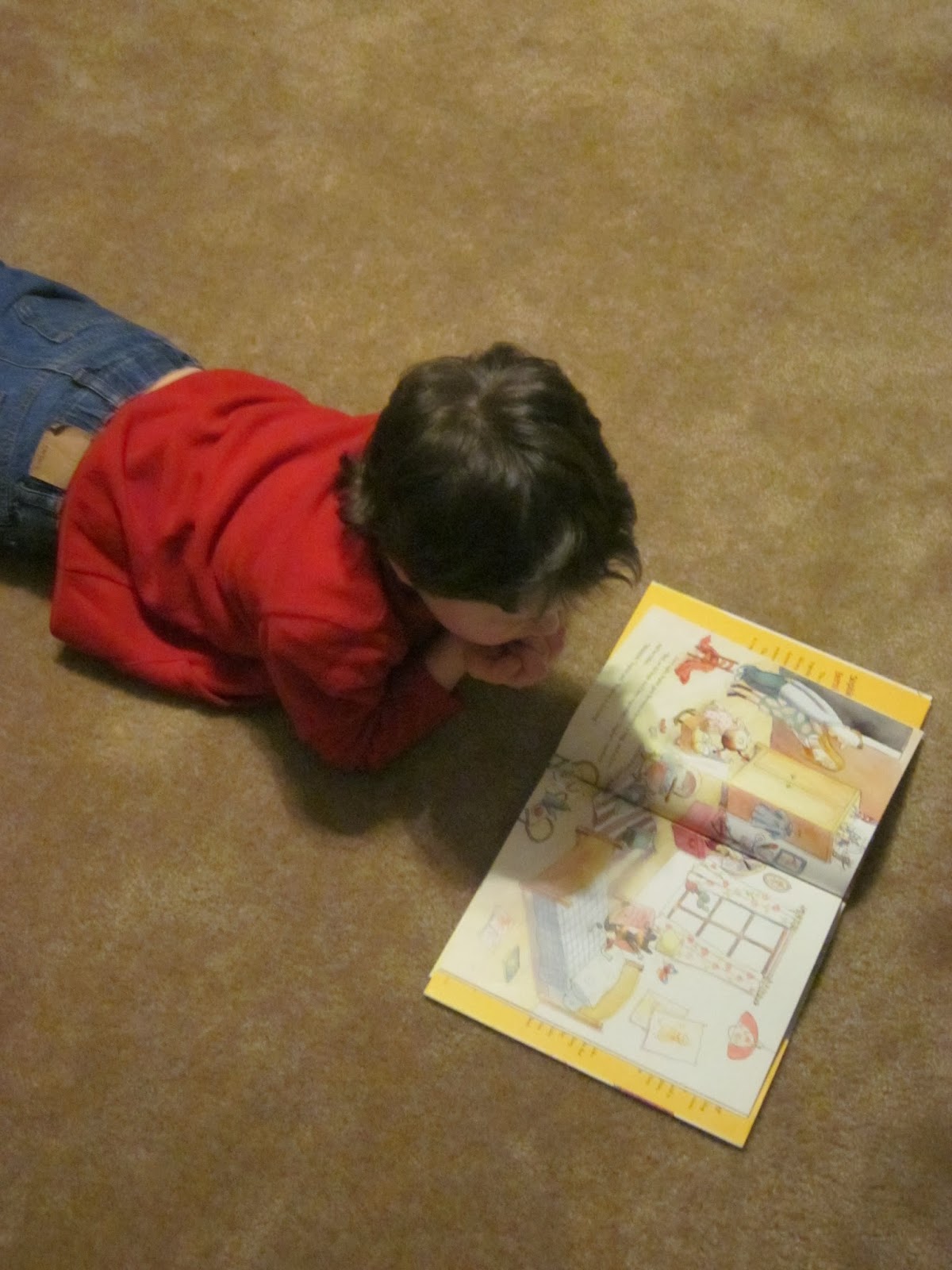 About the story: young Sophie accompanies her parents to the farmers' market.  She selects the squash that her parents are intending to cook and eat, and discovers that:

Sophie names her squash, paints a face on her, and protects her from her parents' designs on a gourd for dinner.  The delightful, funny illustrations by Anne Wilsdorf add to the appeal of the book, and show Sophie as an auburn cutie in pigtails.  (An additional touch of common interest.  I'm becoming quite a fan of auburn cuties in pigtails.)  Sophie tenderly cares for Bernice the squash, takes her to storytime, plays with her, and carefully tucks her in bed at night.  But despite Sophie's careful ministrations, Bernice starts to age.  When a boy at story﻿time draws attention to the spots forming on Bernice, Sophie announces that her squash has freckles.

At this point in the story, I was becoming concerned that there couldn't be a positive outcome.  Smart Sophie, however, has a plan.  She revisits the farmers' market and consults the farmer on the correct way to keep a squash healthy.  The farmer gives instructions: fresh air, dirt, and love.  Sophie makes a bed of dirt for Bernice, and tucks her in.  The scene seems comforting and sweet, and not at all sad or like a goodbye. Sophie passes the winter with her new friend, a goldfish from her intuitive dad.  When Spring returns, Sophie visits her yard and recognizes the bit of green that has appeared.  Sophie and her goldfish picnic with Bernice the plant every day, and it's not long before Sophie finds a surprise beneath Bernice's large leaves. 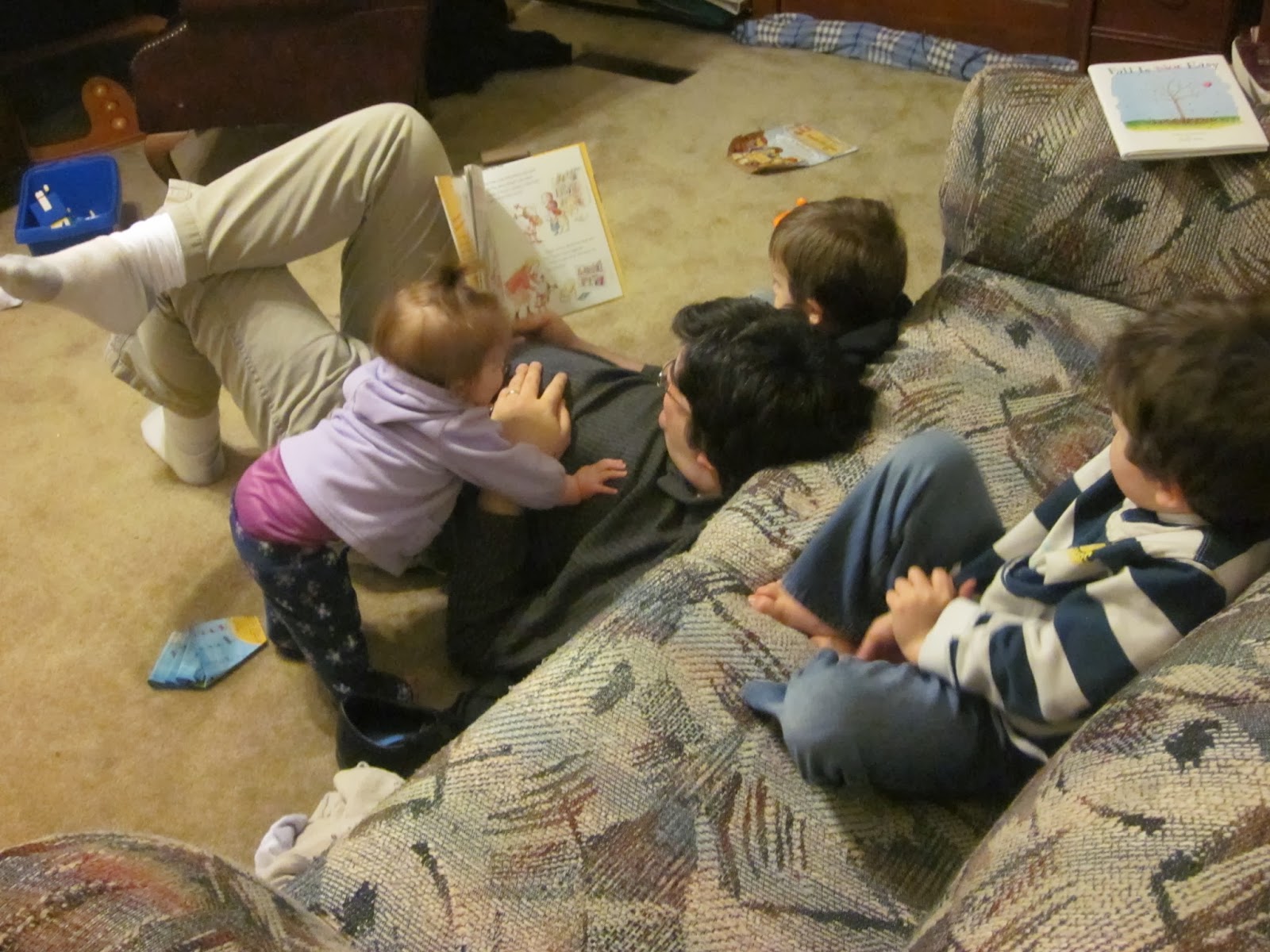 My husband says it's his favorite of the new books, too.

What DD likes: when Sophie's mom suggests eating Bernice with marshmallows, when Sophie takes Bernice to storytime.
What I like: the creativity of Sophie, who doesn't settle for a mere toy store plaything, the great illustrations, ﻿the fresh gardening applications.

It's fun, sweet, funny and endearing.  We think you'll fall in love with Sophie and Bernice, too.